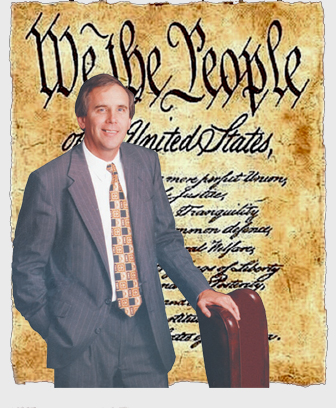 On his way to a career in law, Mark S. Humphreys worked in a variety of jobs from mowing lawns to truck driving, and warehouse labor to teaching school. He earned more real life experience before returning to law school in management positions with United Parcel Service and Roadway Express.

He's Been There. He Understands

He paid his way through college. To pay law school tuition, Mark worked for three law firms, researching and writing papers under the direction of senior attorneys. His work was so outstanding that while in law school, he participated in over twenty jury trials.

Rather than join a big firm, Mark hung out his own shingle...and hit the ground running. On his first day of practicing law on his own, he was in court on seven different cases. Since 1994, Mark has tried over one hundred jury cases and many others before the bench.

He has represented over 3,500 people and businesses in matters ranging from minor criminal cases to serious felonies, and from minor debt collection to a $10 million oil and gas case.

That's Experience you can Depend on

Mark's practice is devoted to the kinds of cases that affect ordinary people and small companies. Even if just a few hundred dollars are at stake, he will help if he believes he can make a difference.

Call Mark Humphreys. He's been there. He understands. He gets results.

Mark S. Humphreys has been able to negotiate favorable settlements for his clients in literally 1000's of cases.

Approximately 75% of Mark's cases are referrals from other Attorneys or past clients.

Mark will give you his honest and frank opinions. You may not always like what he has to say, but if you need to hear it, he will tell you.

You will get the pros and cons and how the facts in your situation fit in with existing law.

University of Texas at Arlington

Client Reviews
★★★★★
When the life insurance company denied my claim for benefits, I didn't think I would ever collect. Glad I called Mark. Joseph
★★★★★
I always thought the insurance company would pay life insurance benefits when my Dad died. They didn't, until Mark filed a lawsuit against them. He collected for me. Thank you Mark. Bob E.
★★★★★
Mark the best thing about dealing with you was that I could actually talk to you. It helped that you got the life insurance company to pay. But, the personal contact made me feel like a person and not a number. Mike F.
★★★★★
You got the life insurance on my mom paid. That was what my wife and I wanted. Hope we don't need you again but if we do, there will be no hesitation in calling you. John R.
★★★★★
We had a good case. Mark said we did and he got the claim paid. My husband and I had talked to 3 other attorneys. Two couldn't help us and one wanted $10,000 to start working. Mark said he would take a fee only if he collected for us. Belinda M.
View More
Submit a Law Firm Client Review